Cash for the most potent idea on Kinston’s Facebook page

The boffins at Kingston, apparently, hate their SSD Now drives and have been trying hard to destroy them, with little success. They have finally given up and have decided to leave the job to the collective wit (or the lack of it) of teh internets. Here’s your chance to win $3000 with Kingston’s SSD Destructo Challenge.

All you have to do is like Kingston’s Facebook page, head over to the discussions tab and describe, in 300 words or less, how you would ruin Kingston’s SSDNow drives. A total of 16 prizes will be awarded, with the grand prize of $3000 or a trip to attend the shooting of Kingston Destructo II. Additional prizes include cash awards of $1000 and $500, VIP gift baskets and Kingston memory products. The SSD Destructo Challenge runs through November 5, 2010. You have to be at least 18 years old and a legal resident of U.S. (void in Puerto Rico and Hawaii), Australia, New Zealand, India, Singapore or Philippines to take part in this competition.

What’s more? Apart from the 16 winners, random people selected at Kingston’ discretion will get goodies too. So, yeah, sucking up just might work this time. More details here. So think like a terrorist and try your luck. Techtree top tip: Try visualizing your boss’s head.

SSD uses a standard hard disk drive interface but unlike an HDD, SSD is very rugged and can handle more shock because it’s built with no moving parts. Kingston’s SSDNow M Series can withstand greater shock than an HDD, making it an ideal solution for executives and road warriors who push the limits of their notebooks.

Kingston’s SSDNow M Series drives are equipped with S.M.A.R.T (Self-Monitoring, Analysis and Reporting Technology) to tell the user when a drive is about to fail.

For added peace of mind, the drives are backed by 24/7 tech support, a three-year warranty and legendary Kingston® reliability. 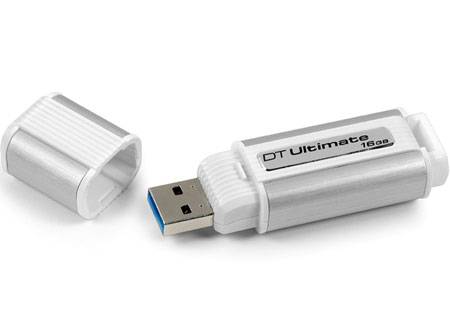 The DataTraveler Ultimate 3.0 has a read speed of 80MB/sec. and a write speed of 60MB/sec. It is available in 16GB, 32GB and 64GB capacities. The combination of speed and size makes it ideal for data backup or fast transferring of large files including music, photos and videos. To ensure backwards compatibility, Kingston is also including a Y cable as some USB 2.0 ports require it to initialize USB 3.0 drives.

“USB 3.0 is the next major milestone in Flash memory for USB products and Kingston wants to have a solution in the marketplace for early adopters,” said Nathan Su, Flash Memory Sales Director, APAC Region, Kingston. “The DataTraveler Ultimate 3.0 is our first USB 3.0 Flash drive offering and is designed for enthusiasts who like to embrace new technology before it goes mainstream.”

What is SuperSpeed USB 3.0?

USB 3.0 is the next major revision to the Universal
Serial Bus. It offers the same ease-of-use and plug
and play capabilities as previous generations of
USB technologies but with a 10X performance
increase and better power management. This
performance increase is achieved through the
SuperSpeed technology, which allows multiple
streams of data transfer and boosts its peak
bandwidth to 4.8Gbp/s (~572MB/s). USB 3.0 devices
are compatible with USB 2.0 and USB 1.1 ports and
connectors but won’t run at SuperSpeed without
USB 3.0 devices, cables and USB ports with a USB
3.0 host controller.
For users of USB 3.0, the goal of connecting devices
to PCs or notebooks is still the same as the USB
2.0 specification. Due to the broad deployment
of USB 2.0 devices in the market, SuperSpeed USB
devices must be backward compatible. The higher
speed and reduced power consumption for the
USB 3.0 specification uses advanced mechanisms
and techniques similar to ones used for other high
bandwidth interfaces, such as the PCI Express
(PCIe) specification.
Video is one of the big drivers for USB 3.0. HD video
uses massive amounts of storage and transferring
video through USB 2.0 can be time-consuming.
External removable storage is also in need of a
speed boost. eSATA is fast, however, the industry
has not seen broad adoption in the market. The
first USB 3.0 devices on the market are USB Flash
drives and external hard drives.
Great uses for USB 3.0
– HD Video
– System and Data Backup
– Adobe Applications (Photoshop, Premiere,
Light Room)
– Autocad
and many more.